Life of our people is to remember forever...

The following churches are identified within townships that are included in the boundaries of our School District #425: 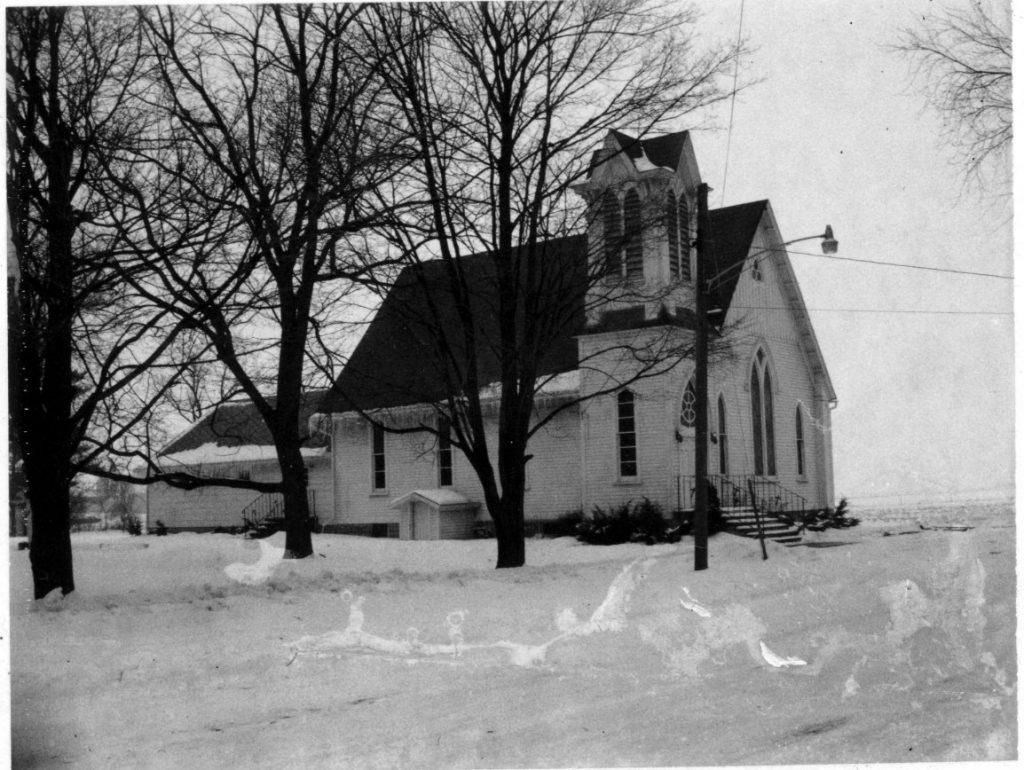 On July 26, 1874 a special meeting was held for the purpose of organizing a regular Baptist church. Some of the attendees of this meeting, who became charter members, were; Rev. W.F. Stahl, Barbara Stahl, John Ray, Elizabeth Ray, Fred Stien, Catherine Stien, Conrad Heeg, Mr. & Mrs. Christian Heeg, Carl Burger, Emilie Burger, Emma Burger and Elizabeth Buck.
The church building was dedicated on November 29, 1874. It was erected at a cost of $4500 and seated 250 people. The Reverend John Young preached the dedication sermon. At one time or another the Congregationalists, Methodists and Lutherans used the church building. In 1967 a building program created a new basement, kitchen, classrooms and a meeting room. Further remodeling in 1971 added a new southwest wing portion and a remodeled sanctuary, which was also reversed at this time, the altar being placed at the east end of the sanctuary.
The First Baptist Church held its last service on May 16th, 2010. 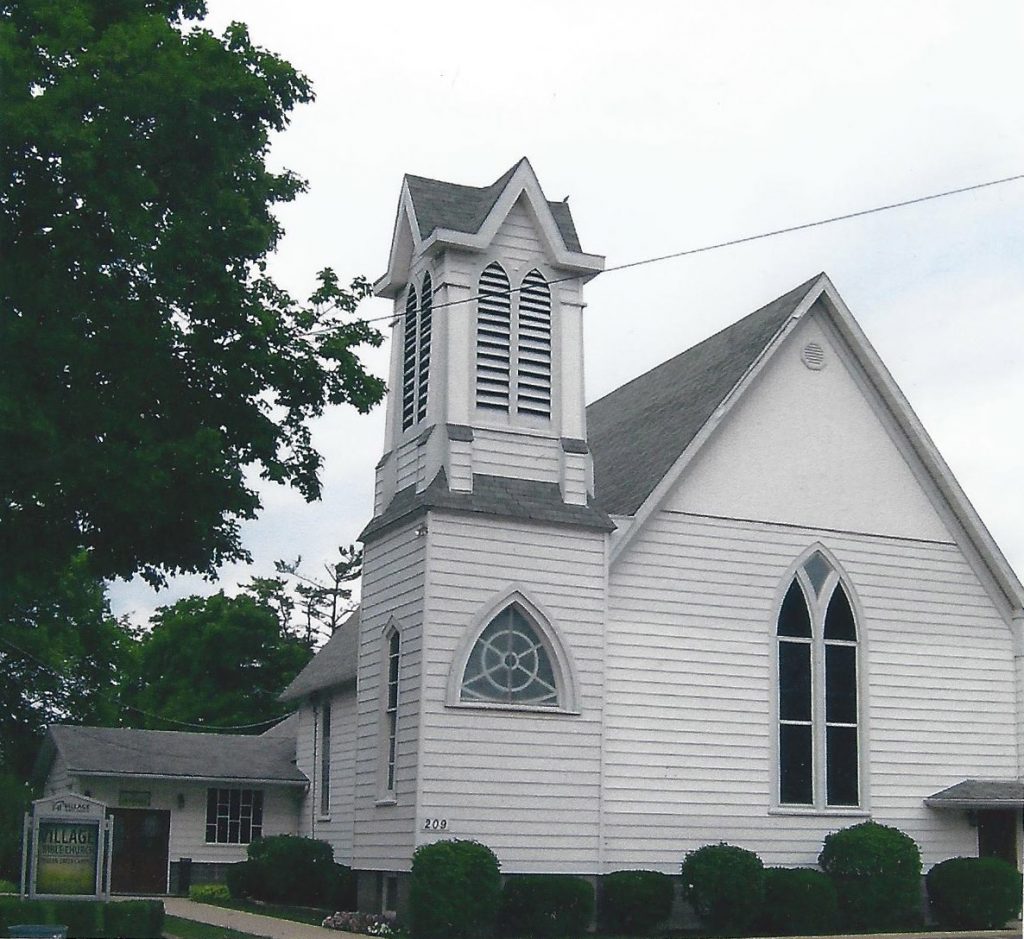 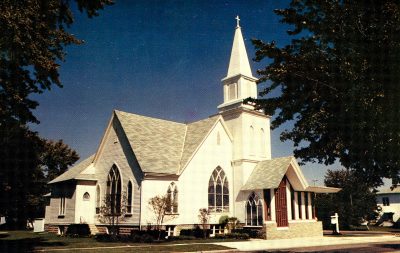 On February 25, 1876, a meeting was held in the home of Mr. & Mrs. Samuel Boslough to consider whether to organize a Congregational church. This was followed by an organizational meeting on March 26th with twenty-two persons becoming charter members. On April 6, 1876, the congregation was recognized as a Congregational church. Services were held in the Shabbona Baptist Church until November 6, 1879 when the Congregational church building was dedicated.
Between 1910 and 1912 the church structure was remodeled. Three stained glass windows were installed, as was a pipe organ. The church interior was remodeled in 1946 and 1952.
In June of 1957, the Congregational churches combined to form the “United Church of Christ” denomination. At that time the church’s name became the First United Church of Christ.
The building was remodeled and enlarged in 1962 and 1963 to include a new educational unit. The church steeple was added in 1975. There is still an active congregation in the church today. 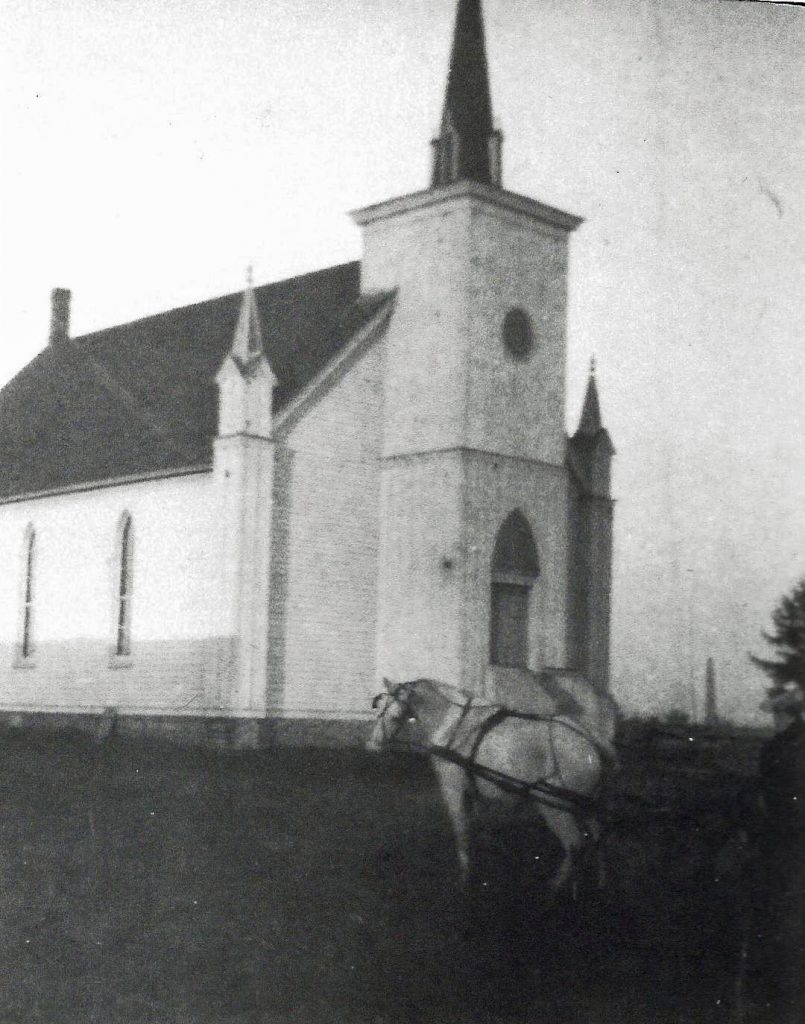 About two miles west of the current Village of Shabbona, the “English settlement” was established in 1851. The colony of English settlers built a Methodist church at the site in 1869. Services were held here until 1914. The church building was later dismantled and the lumber was used to build a barn in Shabbona.

The Shabbona Lutheran congregation was organized on October 27, 1907 by Rev. N. Magelson and held after the Baptists’ regular Sunday afternoon services at the Baptist Church in Shabbona. In 1931, the Shabbona Lutheran Ladies Aid purchased the former Brewer Opera House from Dr. E. J. Brewer for $2000. With the help of the men of the congregation under the direction of the Svihus Brothers, the one-story frame building, which was located on the west edge of the Shabbona business district, was remodeled, decorated and furnished.
It was dedicated on October 29, 1932. Services alternated between Norwegian and English. On Wednesday, March 8, 1933, the church building burned. A part of the kitchen equipment was saved, otherwise the building was a total loss. 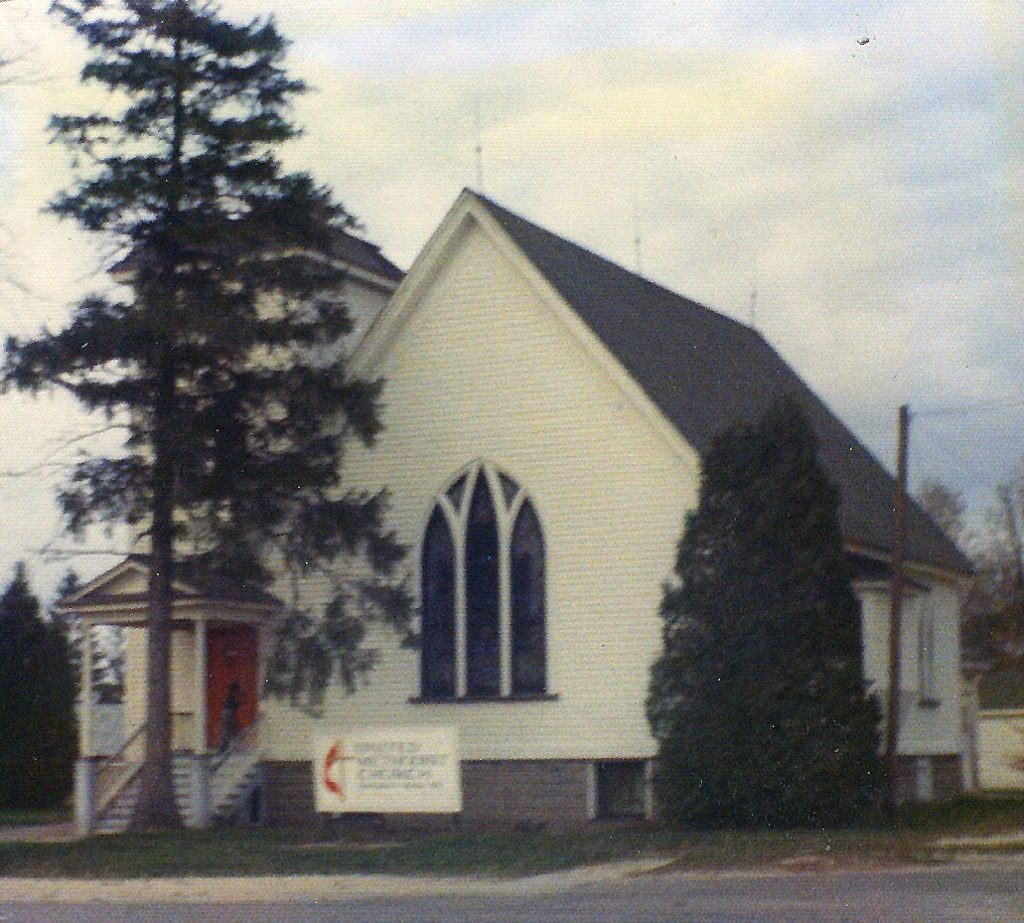 Currently used as a home

On September 2, 1876 the Methodists purchased Lot 14, Block 2 in the Village of Lee for $500. They erected a church building in 1877 at a cost of $2000. Major repairs were made to the structure when the church was struck twice by lightning, once in 1880 and once in 1885.
In 1894 the church was brought into the Rock River Conference.
On December 10, 1895, Samuel and Rosanna Henderson sold their house next to the church to the Methodists for $100 with the provision that it be used only as a parsonage or it would revert to the Henderson heirs. In 1912 the church was remodeled, adding the west classroom, vestibule, basement and new entry.
The Lee Church and the Creston Methodist Church combined in 1939. Later in 1950, the Lee Church was combined with the Paw Paw Methodist Church. This agreement was dissolved in June of 1974.
During the years of 1951 and 1952, the sanctuary and basement were redecorated, new carpeting installed, restrooms added and many new furnishings dedicated. The men of the church paneled the basement and put in a new kitchen. The sanctuary was paneled in 1964 and the northeast basement entrance was built in 1965.
The church, located at 261 E. Kirk Gate, is currently used as a home. 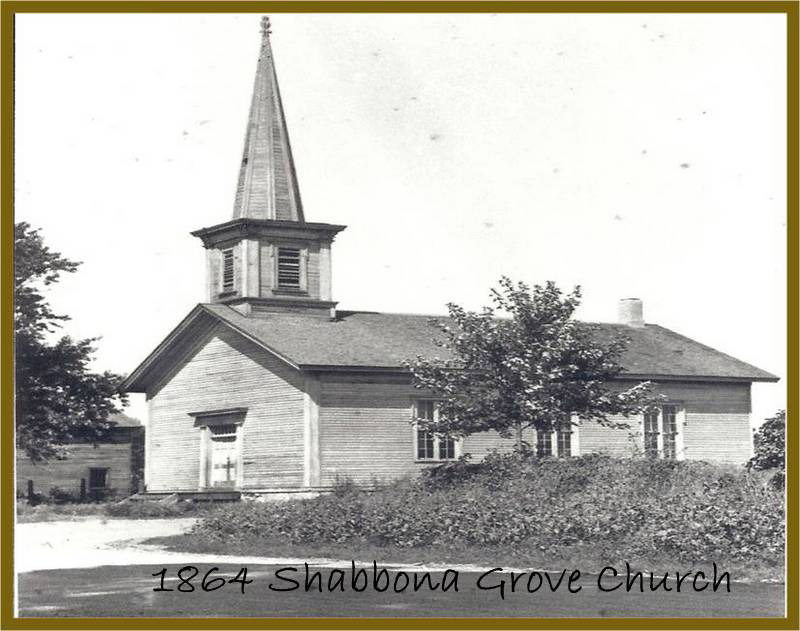 In 1843 the log schoolhouse in Shabbona Grove was used for religious meetings. It wasn’t until 1864 that the Methodist Church was built on the northwest corner of the intersection of Indian Road and Shabbona Grove Road.
The Baptists took possession of the church in 1894, using it into the 1940’s. In 1946 the structure was dismantled. 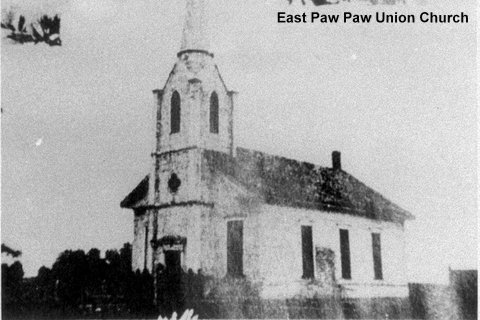 The East Paw Paw Church was originally located along Chicago Road next to the East Paw Paw Cemetery. According to an article in the local newspaper of January 17, 1895, “The question has arisen several times of late as to when the East Paw Paw Church was built. We would say; the daybook of Harry Lobdell says that he commenced work July 20, 1868. Also that papers held by Robert Hampton confirm the same and the building was dedicated the following February, making it 1869.” Another newspaper article from the August 21, 1919 issue of the Earlville Leader states that the “East Paw Paw Church was sold last Saturday and will be torn down and the material used for other purposes.” “The building was sold to Ernest Chapman, the bell to George Yetter for the Scarboro Church, the foundation to A. S. Wells, the sheds to A. S. Wells, the seats to Ernest Chapman, the chairs to Oscar Hatland, the stoves to Al Stokes, the ladder to A. Knetch and the ground of nearly an acre to Fred Goble. In all $871.85.” 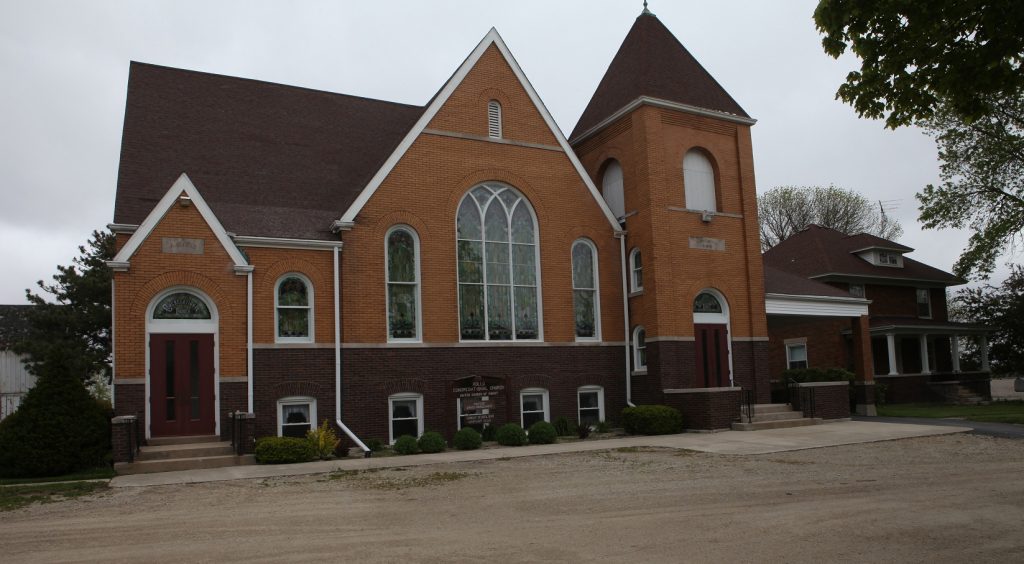 The second organized religious group in Paw Paw Township is what is now known as the Rollo Congregational Church. It was originally called the First Independent Union Church of Paw Paw Township. The first church building was built on Hyde Road in 1865. It was dedicated February 3, 1867 and joined the Aurora Association of Christian Churches in May, 1868.
After the Northwestern Railroad was laid through Paw Paw Township in 1885, the church building and church parsonage were moved near their present site in 1886.
In March of 1913, the church building was severely damaged by a windstorm. Because of this damage, a new church edifice was built and dedicated on June 21, 1914. By August 19, 1914, a new brick parsonage was built and dedicated. In December of 2019, the Rollo Church was accepted into the National Register of Historic Places. Worship services continue to be held each Sunday.

The Ross Grove Presbyterian Church was the first church in Paw Paw Township and was organized in 1854. The building, which was built in 1861, stood on the northwest corner of Chicago and Sleepy Hollow Roads. The abandoned church building was later moved to the Shepardson farm in the early 1900’s.

In 1871 Elias O. Espe offered on acre of land one mile west of the cemetery at the intersection of Perry and Woodlawn Roads. The building was started in 1872 and finished in 1874. Its size was 36′ by 56′ and had a seating capacity of 400 with a cost of about $2300 to build. The building was dedicated on Pentecost Sunday in 1874. On September 4, 1914 this church was struck by lightning and destroyed.
A small Norwegian Methodist church stood on the present site of Calvary Lutheran. The Norwegian Methodists offered the Lutherans the use of their building on alternate Sundays. Eventually the building proved too small for both congregations. The Methodists gave the land and church building to the Lutherans with the provision that the Methodists be allowed to use the building when they requested it and that the new church structure would contain as much wood from the old building as possible.
Work on the new building began in the spring of 1916 and the first services were held in it on Easter Sunday, April 8, 1917. Some Norwegian language services were held until 1938. In 1948 a new parsonage was completed on land donated by Melvin Jacobs.
Calvary Lutheran became the official name of the church in 1953. An educational addition was completed in 1963 and a bell tower added in 1970.
There is still an active congregation attending church each Sunday.

This church was organized in 1875 with the Rev. J.P. Jensen as pastor. Services were held at the Tysdal, Sanderson and Christopher schoolhouses until 1880, when a lot was given by Mr. & Mrs. Goodman Jacobs. This lot was located at the northeast corner of the Perry Road and West County Line Road intersection.
A church was built that year at a cost of $1400 and dedicated on November 14, 1880. In 1914 the Methodists shared their church with the Lutherans whose church building was struck by lightning and destroyed. The combined congregation was too large for this structure, so together the Methodists and Lutherans built a new building which was completed in 1917. While the two congregations worked in harmony, the Methodist congregation disbanded and gave their portion of the church to the Lutherans. 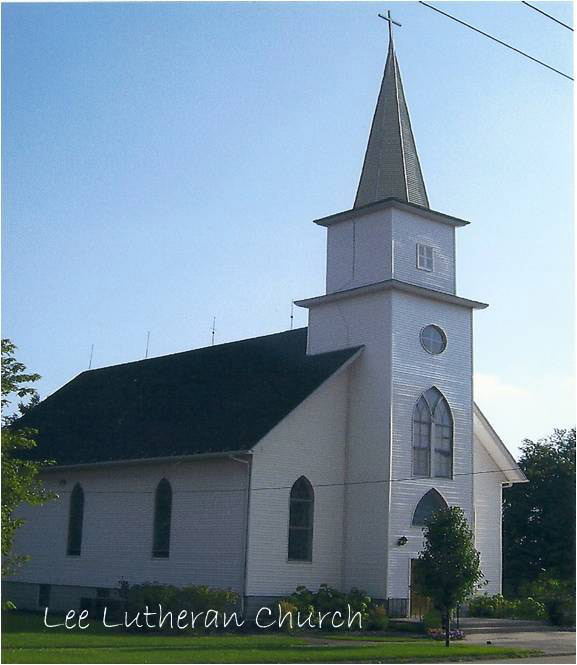 Rev. Didrickson organized the Norwegian Lutheran Church of Lee County in the fall of 1858. Services were held in either the Boyd of Twin Grove schoolhouse until 1868 when a church structure was built southwest of the town of Lee. Land for this building and a cemetery was purchased in 1864 from H. Eden.
The building was 34′ by 60′ and cost $3500. It was located on the northeast corner of the west half of the northeast quarter of section eleven in Willow Creek Township. A parochial school was also established at this time.
In 1870 twenty acres of land was purchased for a parsonage. The present church structure was built in 1896 on the original site. This building was moved to its present site in Lee in the summer of 1924. Services are still held in the church each Sunday. 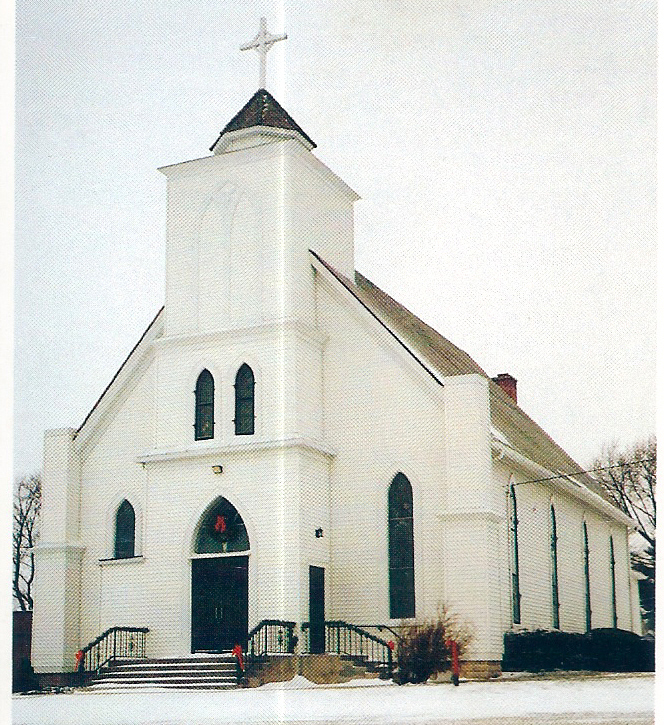 On October 13, 1875 Mr. John Kennedy donated an acre of his farm for a church site, plus $500. Mr. Kennedy, M.P. Harris, James Kirby and Bernard Malloy were active in seeking approval for a parish in Lee. When the approval from the Chicago Archdiocese was received, these men collected subscriptions of $3000 bearing 10% interest, in just three days.
The church was built in 1878 at a cost of $3200. It was 40′ by 60′ with an 18′ extension at the rear of the church. Father Verdin dedicated it on June 17, 1878 as St. James. It is believed that the parish was named after Bishop James Duggan, the fourth Bishop of Chicago. It remained a mission parish under Rochelle for nearly thirty years. In 1906 St. James Parish of Lee became an independent parish, with St. Mary’s of Twin Grove it mission.
The church rectory was built in 1906 on land east of the church that was purchased during Father Finn’s ministry. Father Finn also eliminated the church debt and installed central heating in the church building.
In the early 1960’s the rectory was remodeled and redecorated under Father Connolly’s ministry. A new parish social and education center, containing a kitchen and eight classrooms, was completed in February 1973 and dedicated on September 16, 1973.
The St. James Catholic Church continues to provide worship to many.

Father Westham, of Mendota, read the first mass to the German Catholics at the home of Peter Kimbler in about 1863. He advised the immediate building of a church and nearly $2000 was at once subscribed. John Herrmann donated four acres of ground for the church. In 1864 a stone building was erected on the northwest corner of the southwest quarter of section 16 in Willow Creek Township, Lee County, IL. The building cost was $3000 and its dimensions were 26′ by 40′. There was also an addition which was used for the children’s religious instruction.
Irish Catholics from Lee hauled the stone for the building of the church from a quarry near Rochelle. There the first Catholic Church in Lee area came into being.
Eventually St. Mary’s became a mission of St. James Church in Lee. Sometime during Father Quinlisk’s tenure (1912 – 1924) the church structure became unsafe and had to be abandoned. Members of St. Mary’s parish became part of the St. James parish

Museum memberships run from January 1st through December 31st. A quarterly newsletter is included with membership. Membership Fees are:

Museum Board of Directors